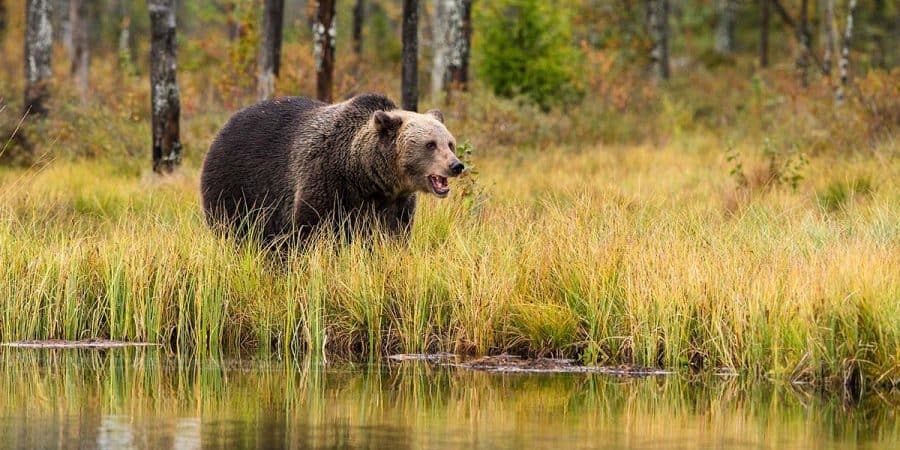 Ah, the great outdoors. Forests, rivers, fresh air. In the majority of the United States, the great outdoors is home to bears. That’s why, whether camping, backpacking, day hiking, biking, or rafting, it is important to be bear aware – and that means being bear-prepared by knowing bear safety.

If you’re in the great outdoors, chances are good you’re in the bear’s house now. Be a good guest and don’t cause trouble. You don’t want to tussle with that much muscle. The good news is, bears are generally peaceful animals who prefer a lot of personal space.

Read on to learn how to act and react in bear country, to keep bears and yourself safe.

Related Content: What To Do If You Encounter a Skunk On Your Hike

Black bears and brown (grizzly) bears – despite the names, it can be difficult to ID these two distinct species by color alone.

Black bears live throughout much of the U.S. They have no shoulder hump, taller ears, and a straight face profile.

Brown bears/grizzlies are found in Wyoming, Montana, Idaho, possibly the North Cascades in Washington, and of course Alaska. Grizzlies have a prominent shoulder hump, small rounded ears, and a concave face profile.

The kind of bear you encounter affects how you should react.

You Find Yourself Near a Bear. What Now?

Tips to Survive a Bear Attack

Most bear attacks are defensive in nature. The bear may bluff charge one or more times, without making contact. A bluff charge is a bounding move toward you that stops short or veers aside. Even when there is contact, a defensive attack is usually brief and intended to neutralize a threat, not kill.

In a predatory charge, a bear has its heads down, its ears back, and moves at high speed.  A predatory attack is prolonged.

If a bear is making a predatory charge at you, use your bear spray when it is within 30 feet of you. Aim low so you don’t spray over the bear’s head.

Always fight back if you are attacked in your tent, camper, building, at night, or after being stalked.

What to do if a black bear attacks:

What to do if a grizzly attacks:

Is this a lot? Yes, it’s a lot. But the fact is, bears largely want to be left alone to do bear stuff in peace. Give them their space, follow the rules to avoid attractants, know how to respond to encounters, and chances are very high that you will enjoy your time in the bear’s house in safety – while keeping bears safe too.