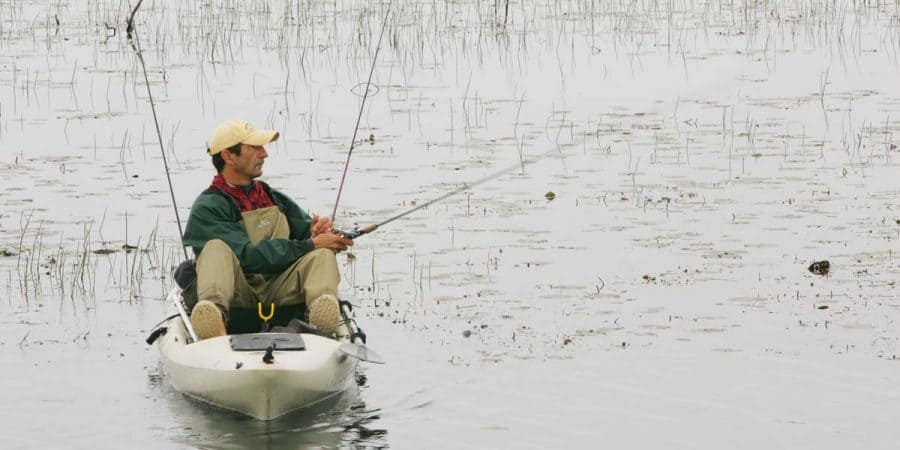 So, you’ve decided to try your hand at kayak fishing. What could be more relaxing than a day out on the water in the fresh air pitting your wits against those cunning fish? But this is not your traditional fishing from a riverbank or off a harbor; this is kayak fishing and dangerous creatures may lurk about.

Kayaks sit very close to the water, meaning you’re near whatever’s lurking down below, not to mention the possibility you might disturb an unsuspecting animal while you’re paddling. Fishing from a kayak doesn’t come without its perils. There are animals you should avoid while kayak fishing: snakes, alligators, crocodiles, beavers, sharks, and stingrays.

As a rule, snakes won’t be interested in you while you’re kayak fishing; they’ll likely want to stay where they are. I’d advise you to be extra cautious in the spring and early summer, though. This is breeding season and these slithery, often highly poisonous creatures are likely to demonstrate a more aggressive nature than usual.

Snakes have been known to fall out of trees into kayaks, so try to avoid paddling under any low-hanging limbs. If you do happen to be unlucky enough to have a snake that insists on following you, then a couple of whacks on the water with your paddle should send it in another direction. If this doesn’t work, leave quickly.

You should also keep a lookout for snakes sunning on rocks, the shoreline, and fallen trees. Even harder to see are baby snakes seeking refuge in shallow water so keep an eye out for them at your put-in, take-out, and any other spots along your route where you might go ashore.

Alligators and crocodiles love the cover, so I’d recommend you avoid any overgrown areas close to the shore. As with any animal, these ancient beasts can be extremely protective of their young and will let out a hiss or rumble if they feel threatened; if you hear this, it’s time to leave. Both species are generally happy to bask in the sun or swim about minding their own business.

Use common sense around alligators and crocodiles. Please don’t get to close or swim near them and take extra caution in the spring as this is breeding season. Try to avoid dusk, dawn, and night times as this is when they feed.

Beavers can chop wood with their teeth, so imagine what they can do to your hand or leg. A prior warning of aggression will come in the form of a tail slap. Again, these sometimes dangerous creatures can become very hostile and territorial when they’re tending to their young, so I’d suggest if you do spot a beaver by a dam with its brood, keep away.

If they do decide to attack, they’re likely to circle you, their way of trying to determine if you’re a danger to them. Merely moving away is usually enough, but if they insist on getting too close, a couple of smacks on the water with your paddle should do the trick.

If you’re going to be fishing in salt or brackish water, there’s a chance you’ll come across a shark. Although they’d much rather chomp into a fish or marine mammal than your limbs, don’t tempt fate by putting your hands in the water or dangling your legs.

Sharks are curious by nature, so if one does approach your boat, try to stay calm, especially if it starts bumping against or taking a bite of your kayak. It’s likely trying to determine if your boat is food. It should soon be on its way after realizing its mistake. We know sharks love fish, so whatever you do, don’t leave any of your catch attached to your kayak, or else there’s a good chance you’ll have a dinner guest.

It’s not only sharks you have to be wary of in salt water. In the summertime, stingrays are in abundance. If you do happen to hook one, make sure you use a long hook remover and be mindful of its tail. You can get some nasty infections from the serrated, mucus-covered barbs of a stingray.

While catching these dangerous creatures can sometimes cause a problem, the biggest threat comes when stepping out of your kayak and into the water, especially if you’re not wearing anything on your feet. So I’d suggest a good pair of wading boots, the sort with ray guards. It’s also a good idea to shuffle your feet; this tends to scare the stingrays away.