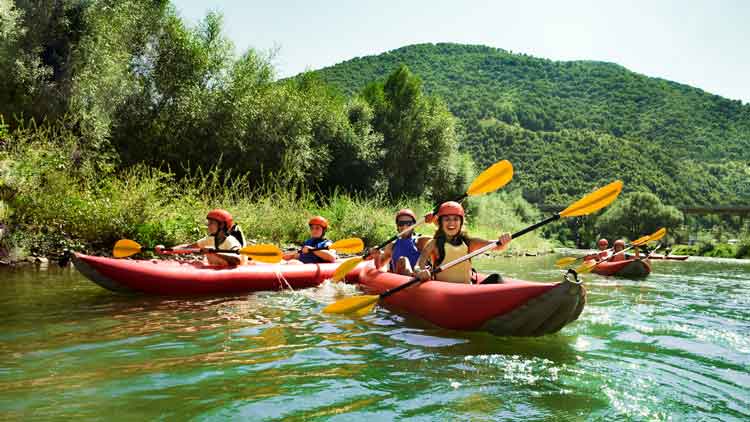 Inflatable kayak? Yep, you’ve probably seen or heard of them but if you haven’t, there are kayaks that can be inflated when you’re ready to go out on the water and deflated for easy transport and storage in your closet or under your bed.

Blow-up kayaks are super durable too! Many are designed for Class IV whitewater and manufactured to withstand punctures and provide years of enjoyment. These are not wimpy little pool toys!

Styles and Categories of Inflatable Kayaks

Inflatable kayaks come in a variety of types designed for different water conditions and activities.

Do you know which type of kayak is suitable for your desired outings?

The most common types of inflatable kayaks are listed below. Some of these models will overlap such as a tandem, inflatable fishing kayak.

Inflatable recreational kayaks are comfortable boats perfect for day kayaking trips, light touring on lakes, and slow-moving rivers to Class I to II rapids. Their versatility makes for great entry-level boats for those who aren’t sure what type of paddling they’ll be doing or for those interested in a multi-use kayak.

These kayaks are shorter in length (under 12 ft) and wider for added stability.

These kayaks are long and narrow for ease of gliding through the water. Rudders or tracking fins are common design features for maximizing control and tracking.

In contrast to touring kayaks, inflatable whitewater kayaks have a short, wide design and no tracking fin. This shape allows for maneuverability in Class 1 to Class IV rapids.

Sit-in inflatable whitewater kayaks have the ability to attach spray skirts to keep water out and the interior dry.

Self-bailing is a common design feature of many inflatable kayaks. These kayaks have mesh drain holes to let water back out of the kayak so it’s not swamped with water.

Inflatable fishing kayaks can be sit-on-top kayaks or sit-in kayaks and come in different sizes. Many are self-bailing and extra-wide with rigid floors for added stability for anglers who want to stand while fishing.

The main difference between inflatable fishing kayaks and other blow-up kayaks is that they come outfitted with fishing accessories like rod holders and features like D-rings for securing fishing equipment.

The Sea Eagle 385fta FastTrac Angler is a great example for those looking for an inflatable fishing kayak.

Inflatable fishing kayaks aren’t the only inflatable to look for if you’re into fishing. Fishing float tubes are incredibly fun boats that offer certain advantages over blow-up kayaks.

Inflatable sit-on-top kayaks have a wide, open deck. You sit on top of these kayaks instead of having your legs enclosed in a cockpit like traditional sit-in kayaks.

Inflatable sit-in kayaks are the blow-up version of the more traditional kayak that most people think of when picturing a kayak. Just like its hardshell cousin, it has a cockpit that you get inside.

Sit-in kayaks have the advantage of being warmer in cold weather and provide the ability to add a kayak spray skirt that goes around the paddler and attaches to the cockpit opening to keep water out of its interior.

Inflatable canoe-style kayaks like the Sea Eagle RazorLite or Travel Canoe are much like blow-up versions of hardshell canoes. They typically have higher walls than other inflatable sit-on-top kayaks and in contrast to other inflatable kayaks, paddlers use a single-blade paddle rather than a double-bladed kayak paddle.

Whatever the type of kayak, recreational, touring, whitewater… Inflatable kayaks come in various seating options. They may be designed for one, two, or three paddlers. Some even have adjustable seat locations that allow for solo or tandem paddling.

The design features and materials of inflatable kayaks will differ between manufacturers and models and need to be considered when making your choice in an inflatable kayak.

Hypalon was previously used on NRS boats. Hypalon is DuPont’s name for chlorosulfonated polyethylene (CP) but DuPont stopped making Hypalon in 2010. This is the new product that has replaced Hypalon.

HD40 gum – HD40 gum is an anti-abrasion material is used on the bottom of NRS Pennel Orca® boats.

AIREcell urethane – Thermal-welded internal bladder system of Aire inflatable kayaks made from 10 – 12 mil urethane film. These bladders are covered with a heavy-duty PVC-coated polyester fabric to protect against abrasion, wear, tear, and sun.

Denier Ripstop Polyester – A fabric made of interwoven reinforcement threads in a crosshatch pattern that resists the spreading of tears.

Other Common Materials are PVC, PVC-coated polyester, and vinyl.

Thermal welding uses pressure and heat to permanently bond the seams together without the need for toxic glues that can deteriorate over time with repeated use and from exposure to the sun.

For superior strength and durability, consider an inflatable kayak that uses one of these technologies.

Longer inflatable kayaks, those over 12ft, are faster with improved tracking making them great for open water while shorter kayaks tend to be slower and harder to paddle straight which is a benefit to those on streams and rivers of Class I rapids or greater.

Deeper inflatable kayaks like the canoe-style inflatables offer more storage and legroom but can be blown around more by the wind.

Width, stability, and speed are all connected. Wider inflatable kayaks are more stable but these kayaks are slower and have poorer tracking.

The weight and maximum load capacity of your inflatable kayak are extremely important for your safety and ease of transport and storage.

You need to pick an inflatable kayak that has a maximum load capacity that’s greater than your weight and the weight of all your gear combined. You risk sinking your kayak if you exceed its maximum weight capacity.

Not sure what gear you’ll be taking? At minimum, you’ll need to carry the necessary kayak safety equipment.

Will you be out on your kayak for an hour or all day? Your seat will need to be comfortable for your paddling adventure. It will also need to fold down easily for transport and storage.

Will you want a lower seat for better stability on whitewater or will you need a raised seat for fishing and paddling?

The standard blow-up and padded seats of inflatable kayaks have a bad reputation for being uncomfortable. You’ll get what you pay for but there are always comfy aftermarket seats that can replace the seats that come with the kayak. Well, as long as you buy a kayak with removable seats.

Some inflatable kayaks have no tracking systems others may have a tracking fin or retractable skeg to help keep your kayak moving straight ahead.

The number of chambers is a safety factor. If the inflatable kayak has one chamber and gets punctured, you’re more likely to sink than in a kayak with three chambers.

Leafield valves deserve a special mention. These valves are commonly found in quality, inflatable kayaks. Leafield Marine is the world’s leader in valves for inflatable boats. To reduce the chance of any leakage, look for these user-friendly valves for superior strength and quality.

There are a lot of extra features that may be found in various kayaks. These features depend on the manufacturer or the type of inflatable kayak you’re buying. You’ll find many of these to be of great advantage.

Some inflatable kayak manufacturers go the extra mile and include extras like a carrying bag, pump, and repair kit for extra convenience.

What Are the Best Inflatable Kayaks?

Fortunately, there are a lot of great manufacturers out there making high-quality inflatable kayaks to accommodate a variety of specified activities and water conditions though one brand stands out, Sea Eagle Boats. If you haven’t you should really check them out.

Quality inflatable kayaks make for some of the best outdoor equipment you’ll ever own. The ease of storing and transporting these boats opens up opportunities for those that can’t transport hardshell kayaks and for anyone who wants to throw a kayak in the car for a spontaneous camping kayaking trip or extended vacation. You can even take your inflatable kayak on a plane! Definitely not something you’re likely to do with your hardshell kayak.

Still on the fence about purchasing an inflatable kayak?

If you have further questions, check out our reasons for buying an inflatable kayak.

Thanks for reading and happy paddling!