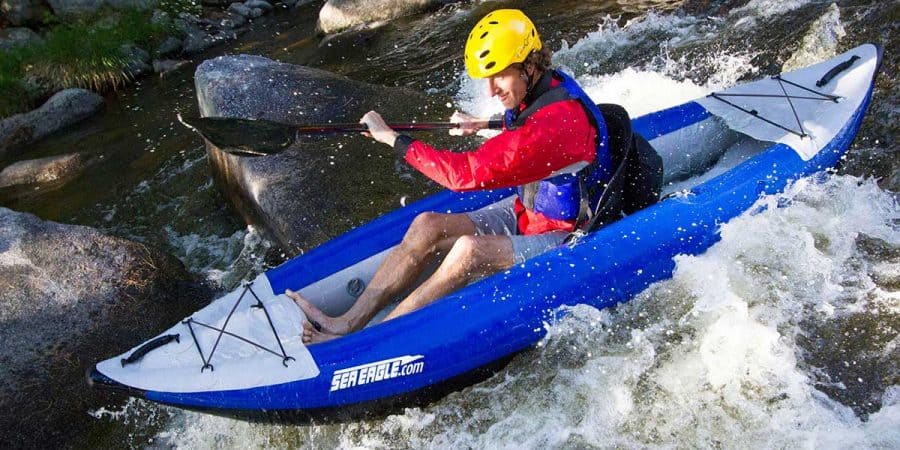 The Sea Eagle 300x Explorer is the smallest 1-person, inflatable kayak in the Explorer series and the best kayak in its class offering superior design, durability, stability, and performance. Explorer kayaks are the most versatile Sea Eagle offers. Designed to tackle any adventure on whitewater, flatwater, and ocean surf.

If you like a variety of adventures, this is the perfect solo inflatable kayak. It’s a great wet or dry kayak capable of handling rapids up to Class IV.

On flatwater, the 300x Explorer is extremely safe and stable offering improved tracking on open water when the removable skeg is in place.

If you are looking for versatility, maneuverability, and control in a solo, inflatable kayak, look no further.

About the Sea Eagle Explorer Series of Inflatable Kayaks

Sea Eagle Boats is a family-owned and run company located in New York. They have a stellar reputation for making high-quality inflatable boats since 1968 and the Explorer kayak series is proof of their excellence in the inflatable boat industry.

Sea Eagle Explorer kayaks are ingeniously designed wet or dry kayaks built to transition from a whitewater kayak to a flatwater kayak. Sixteen super-fast, self-bailing drain valves in the floor of the kayak can be opened to drain the waves and spray from rapids or closed to remain dry on open water.

Sea Eagle Explorer inflatable kayaks are used by kayakers for open water touring, whitewater rivers, flatwater rivers, ocean surf, exploring, fishing, camping, and more. The versatility and rugged performance of Explorer kayaks make them the perfect choice for all-around kayakers who are looking for many years of fun.

For a wealth of additional information, check out the Sea Eagle Explorer Kayak Owner’s Manual.

The modular design of Sea Eagle Explorer inflatable kayaks consists of an extremely rigid, high-pressure, Drop-Stitch floor that tucks into an outer floor with reinforced fabric for a double layer of protection against abrasion and puncture from rocks, logs, and other debris.

The high-pressure, drop-stitch floor provides a floor rigid enough to stand up in while also yielding unparalleled stability and performance. To achieve this, the drop-stitch floor is created by joining two layers of poly-based fabric with tens of thousands of polyester threads to form a base floor layer to which an air-tight coating is applied.

There is an added bonus to this modular design. Removal of the drop-stitch floor allows quick and easy cleaning of every crevice of the kayak. Proper cleaning improves the longevity of inflatable kayaks.

Sea Eagle Explorer inflatable kayaks have a self-bailing system made up of 16 easy-to-open and shut rapid drain valves. When the valves are open, the water will drain out as fast as it comes in. Perfect for whitewater. On flatwater, especially in the cold, keep them closed for a warm, dry paddling experience.

Sea Eagle Explorer kayaks have another design feature worth mentioning. Its large, removable, rear, center skeg can be easily added or removed to accommodate different water conditions and ease of storage. To install, simply slide the skeg into the track on the bottom of the kayak and lock it in place.

When installed, the skeg improves tracking on flatwater by reducing yaw, the annoying left and right twisting as you paddle.

Remove the skeg when on whitewater and in shallow conditions. You don’t want to drag or tear up the skeg on rocks or the water bottom.

This package also comes with an onboard kayak storage bag for storing your essentials.

The Sea Eagle 300x Explorer – Pro Carbon Kayak Package (Model Number 300XK_PC) is the same as the Pro Package except it has the upgraded, top-end, ultra-light, carbon-fiber, kayak paddle.

The Sea Eagle 300x Explorer – QuikRow Kayak Package (Model Number 300XK_QR) is for the enthusiast who’s into it all: whitewater, flatwater, fishing, and rowing!

The Universal QuikRow Kit is a fixed frame rower that attaches to the Explorer in less than 60 seconds. It’s quick and easy to set up and a pleasure to use! How cool is that?!

Like all the other Sea Eagle inflatable kayaks the Sea Eagle 300x Explorer with QuikRow Kayak Package still fits in the trunk of your car!

Sea Eagle 300x Explorer inflatable kayaks have been certified by the National Marine Manufacturers Association (NMMA). This certification confirms that they have been manufactured to meet the American Boat and Yacht Council (ABYC) standards for design, construction, and safety.

Sea Eagle 4-Month Trial Guarantee: Try a Sea Eagle Risk-Free for 120 days! “If you’re not totally happy with your boat, just return it in good condition for a full refund of your purchase price.”

The Sea Eagle 300x Explorer inflatable kayak is an impressive 1-person kayak suitable for a wide range of kayakers including beginners.

The Sea Eagle Explorer series has been around since the 1960s! That alone is impressive! The 300x Explorer is a well-designed and well-tested boat crafted from the highest quality materials to provide you many years of enjoyment in a variety of waters from flatwater up to Class IV rapids.

With a length of 9′ 10″ the 300x offers increased maneuverability and control which helps tremendously in whitewater and at 30 lbs, it’s easy to carry.

There is only one caveat. If you are looking for speed on open water, it’s not the fastest of the Sea Eagle lineup of kayaks. For speed, you’ll want to look at the Sea Eagle FastTrack.

If you’re looking to paddle solo, you can’t go wrong with the 300x.