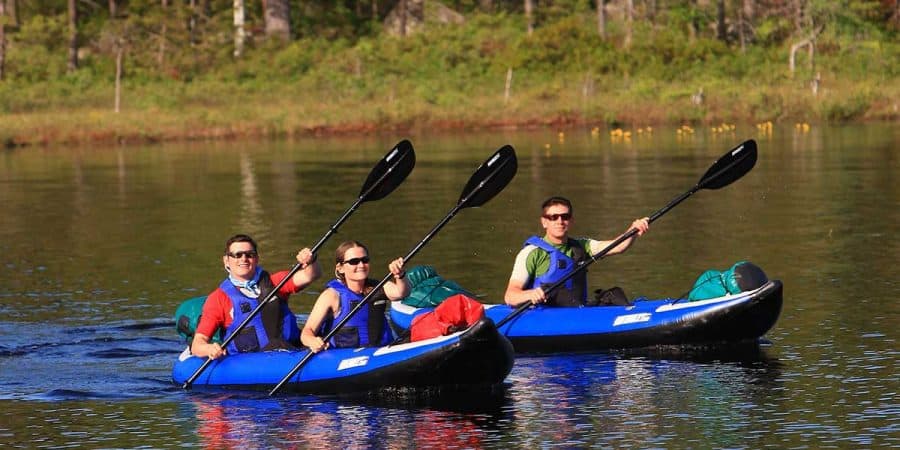 At 12 foot 6 inches, the Sea Eagle 380x Explorer is the medium-size model in the Explorer series of inflatable kayaks. Perfect for solo or tandem kayakers desiring versatility in adventures, the rugged design tackles whitewater, flatwater, and almost everything in-between including fishing, sailing, and rowing.

The Sea Eagle 380x Explorer inflatable kayak does it all! Take a look…

About the Sea Eagle Explorer Series of Inflatable Kayaks

Sea Eagle Boats is a family-owned and run company based in New York that has been making high-quality inflatable boats since 1968 and their line of Explorer kayaks is proof of their expertise. These boats are built to handle almost any type of water… Ocean, whitewater rivers, fishing, bays, lakes, flatwater rivers, and camping.

Sea Eagle Explorer inflatable kayaks are wet or dry boats with 16 super-fast, self-bailing drain valves that can be left open to drain the waves and spray of Class IV rapids or closed for a dry and comfortable paddle on flatwater.

A second feature that allows the Explorer inflatable kayak to smoothly transition from whitewater to flatwater is a removable, slide skeg that can be slipped in place for improved tracking on open water.

For a wealth of additional information, check out the Sea Eagle Explorer Kayak Owner’s Manual.

Sea Eagle Explorer inflatable kayaks have a unique modular design featuring an extremely rigid, high-pressure, drop-stitch floor that fits on top of an outer floor to increase structural integrity. (Note the figure above showing the Explorer kayak with and without the drop-stitch floor.)

The creation of the drop-stitch floor involves the joining of two layers of poly-based fabric with tens of thousands of fine polyester threads. This forms the base layer of the floor to which an air-tight coating is applied. The result after inflation is a flat, rigid surface that greatly improves the stability and performance of the inflatable kayak.

The modular design also allows quick and easy removal of the drop-stitch floor for cleaning. It’s so much easier to thoroughly clean in the crevices of an inflatable kayak when the floor can be removed.

Sea Eagle Explorer inflatable kayaks have 16 easy-to-open and shut rapid, self-bailing, drain valves. When open, water drains out as quickly as it enters making them well suited for whitewater.

Yet, in flatwater situations, you can remain high and dry while paddling with the self-bailing drain valves closed. A very important feature when the weather or water is cold… Well, you’ll stay dry as long as you adjust your kayak paddle, drip rings properly.

Another important design feature of the Sea Eagle Explorer series of inflatable kayaks is the large, removable, center skeg at the rear of the kayak which can easily be removed whether inflated or deflated to accommodate different water conditions and ease of storage.

Remove the kayak skeg for whitewater or shallow water kayaking. You don’t want to be dragging the skeg along water bottoms especially in rocky river bottoms.

For maximum paddling efficiency on flatwater, replace the skeg for reduced yawing, that annoying rotation to the left and right as you paddle. The skeg is an extremely important feature for improved tracking during long flatwater touring.

The Sea Eagle 380x Explorer – Deluxe Solo Kayak Package (Model Number 380XK_DS) is a great option for the solo paddler who wants more room for legs and gear than the 300x Explorer. The maximum load capacity is far greater too, 750 lbs vs 395 lbs in the 300x.

This package also comes with a bow and stern kayak storage bag for your essentials.

Just as with the model above with the inflatable seats, this 2-person kayak can also be set up as a 1-person kayak.

The Sea Eagle 380x Explorer – Pro Carbon Kayak Package (Model Number 380XK_PC) has the same features as the Pro Kayak Package except for the paddles which have been upgraded to high end, Carbon-Fiber Paddles.

The QuikSail Kayak Package gives you another amazing way to utilize the 380x Explorer. If you’re into sailing and kayaking, it’s far less expensive than buying both a sailing dinghy and kayak separately.

Whether you want to take your inflatable 2-person kayak out for some exercise or a relaxing trip on flatwater, this package has you covered.

Sea Eagle 380x Explorer – QuikRow Kayak Package (Model Number 380XK_QR) expands the capabilities of the 380x tandem kayak into a rowboat. Whether you’re into flatwater, whitewater, fishing, or rowing, this package has you covered.

The features of the QuickRow Kit include a swivel seat, a set of oars, and two fishing rod holders.

Sea Eagle 380x Explorer inflatable kayaks are certified by the National Marine Manufacturers Association (NMMA) confirming that the Explorer lineup of kayaks has been manufactured to meet the American Boat and Yacht Council (ABYC) standards for design, construction, and safety.

Sea Eagle kayaks are covered from bow to stern by a limited 3-year warranty against manufacturing defects.

They can afford to offer an all-inclusive warranty because of their vast experience in designing and selling inflatable boats. They’ve stood behind their products for over 50 years.

As a proven leader in the industry, Sea Eagle generates confidence and peace of mind in those who own their boats.

At the time of writing, the Risk-Free Return Policy and the Terms of Sale both mention a 120-day risk-free trial. But I also received an email offering a limited-time “6-Month Risk-Free Trial Offer on every Sea Eagle”.

“If you’re not totally happy with your boat, just return it in good condition for a full refund of your purchase price.”

Sea Eagle Explorer inflatable kayaks are simple to inflate, setup, operate, deflate, and pack up. Check out how easy they are to operate…

Personal Flotation Device (PFD): You should always carry a United States Coast Guard (USCG) approved PFD and children should always wear a PFD. PFDs are not only necessary for your boating safety, they are required by law on government waters.

The Sea Eagle 380x Explorer inflatable kayak provides versatility, durability, portability, and tandem kayaking adventures. This kayak does it all!

One kayaker can easily maneuver this 12′ 6″ kayak through rapids, yet it’s large enough to easily accommodate two kayakers, their gear, and a small child or a dog.

Whitewater, oceans, flatwater, touring, leisurely float, fishing, kayak-camping, rowing, sailing, cruise along with an electric motor, and more. The various packages are affordably designed to meet the needs of your favorite adventures.

The 380x Explorer has only one limitation. The Explorers are not the fastest in the Sea Eagle lineup. For speed, you’ll want to look at the comparable Sea Eagle 385ft FastTrack inflatable kayak.