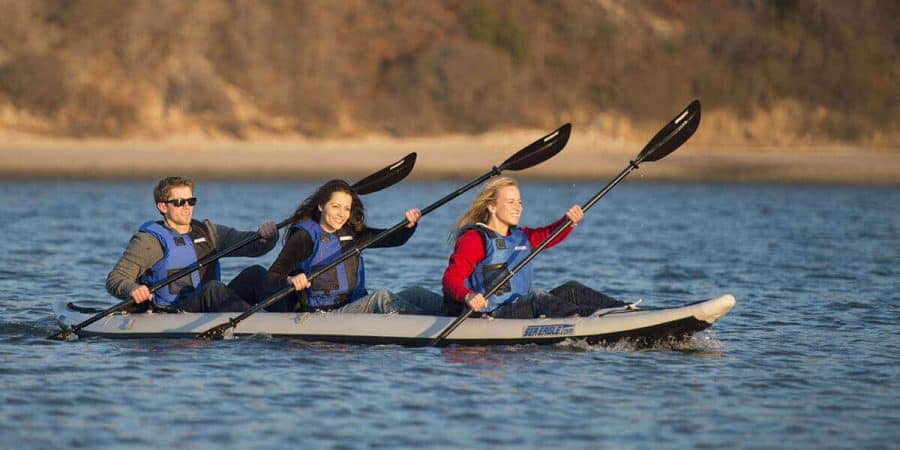 One, two, or three paddlers, the Sea Eagle 465ft FastTrack inflatable kayak is fast, lightweight, incredibly stable, and super durable. It’s the best inflatable kayak in its class and a perfect choice for families who paddle on flatwater lakes, bays, marshes, calm rivers, and whitewater up to Class II rapids.

Have kids like me? The stability of the 465ft FastTrack provides safety for those little ones. This kayak doesn’t flip or tip easily… With a one-year-old and another on the way, kayak stability provides great peace of mind!

Speaking of safety, with its almost indestructible construction and multiple inflation chambers, the Sea Eagle 465ft FastTrack is virtually unsinkable. If one of the inflation chambers is compromised, the remaining air chambers will keep the kayak afloat.

About the Sea Eagle FastTrack Series

The Sea Eagle FastTrack series of inflatable kayaks are extremely well designed. The combination of FastTrack’s sleek, curved, touring shape and state-of-the-art “NeedleKnife Keel” provide a faster, smoother paddling experience than ever before!

The FastTrack’s large side tubes, rigid “NeedleKnife” molds at both bow and stern, and high-pressure Drop-Stitch keel provide a cleaner entry and exit through the water. These features allow FastTrack kayaks to paddle faster and easier with greater glide in a wide variety of open water conditions including waves, currents, and wind.

In addition to its performance, the Sea Eagle FastTrack series provides true rigid kayak performance with the benefits of an inflatable kayak. With the 385ft FastTrack and 465ft weighing 35 and 44 pounds respectively, they are a dream to lift in comparison to their hardshell counterpart which can weigh twice as much.

Best of all, FastTracks are inflatable making them easy to pack, store, and transport! No more struggling with roof racks! These Sea Eagle kayaks fit in the trunk of your car. Want to take your kayak on vacation? No problem! With the use of its carry bag, you can check any Sea Eagle kayak as luggage on a plane. How cool is that?!

The keel design features sharp bow and stern molds that efficiently cut through wind, currents, and waves for an impressively fast and super clean entry and exit! This design also provides buoyancy and lift to improve speed whether paddling or using an electric motor.

The Sea Eagle 465ft FastTrack inflatable kayak has a high-performance, asymmetrical shape. Its sleek design is tapered and narrow at the bow while being wider at the stern giving it the ability to cut through waves faster and easier while providing buoyancy at the set positions where it’s most needed.

The Sea Eagle 465ft FastTrack inflatable kayak has a unique modular design featuring an extremely rigid, high-pressure, drop-stitch floor that fits on top of an outer floor to increase structural integrity. (Note the figure above showing the FastTrack kayak with and without the drop-stitch floor.)

The creation of the drop-stitch floor involves the joining of two layers of poly-based fabric with tens of thousands of fine polyester threads. This forms the base layer of the floor to which an air-tight coating is applied. The result after inflation is a flat, rigid surface that greatly improves the stability and performance of the inflatable kayak.

The modular design also allows quick and easy removal of the drop-stitch floor for cleaning. It’s so much easier to thoroughly clean in the crevices of an inflatable kayak when the floor can be removed.

Another important design feature of the Sea Eagle 465ft FastTrack inflatable kayak is the large, removable, center skeg at the rear of the kayak which can easily be removed whether inflated or deflated to accommodate different water conditions and ease of storage.

Remove the kayak skeg for whitewater up to Class II or shallow water kayaking. You don’t want to be dragging the skeg along water bottoms especially in rocky river bottoms.

For maximum paddling efficiency on flatwater, replace the skeg for reduced yawing, that annoying rotation to the left and right as you paddle. The skeg is an extremely important feature for improved tracking during long flatwater touring.

The discount kayak packages for the Sea Eagle 465ft FastTrack inflatable kayak are designed to accommodate the needs of different types of paddlers. The basic accessories of each package are the foot pump, repair kit, kayak carrying bag, and easy-to-store kayak paddle(s) with drip rings for staying dry.

The quality of the seat, paddle, and accessories change between packages.

There is room for plenty of gear, the family dog, children, and a third seat in the 465ft FastTrack making it the perfect all-around kayak for families who want to experience everything from flatwater up to Class II rapids.

This kayak is on the to-buy list for my growing family. Check out why in the related article below.

This is the 3-person version of the 465ft FastTrack – Deluxe 2-Person Kayak Package.

Why not buy the 3-person package over the tandem version above? Then you’ll have the choice to set it up as a 1, 2, or 3-person kayak. You never know when you’ll want the extra seat for family and friends.

At just 2.4 lbs., the AB50 carbon fiber paddles are each a half-pound lighter than an AB40 paddle. This savings in paddle weight helps reduce fatigue on longer paddling trips.

Get ready to relax on the water with speed, style, and comfort in the 465ft FastTrack – Pro Motor Kayak Package (Model Number 465FTK_PM). If you want to cover a lot of water without overexerting yourself, this is the way to go!

With this kayak package, you’ll have the best of both worlds. Paddle when you want, or attach the electric motor, and zip along.

The Sea Eagle 465ft FastTrack – QuikRow Kayak Package (Model Number 465FTK_QR) offers paddling, fishing, and rowing all in one package and it still fits in the trunk of your car!

An electric motor on a kayak can be a huge plus and a lot of fun especially if you are going to cover a lot of territory.

Once you have the motor mount installed on your kayak, attaching one of three recommended electric motors is simple.

Sea Eagle 465ft FastTrack inflatable kayaks are certified by the National Marine Manufacturers Association (NMMA) confirming that the FastTrack lineup of kayaks has been manufactured to meet the American Boat and Yacht Council (ABYC) standards for design, construction, and safety.

Sea Eagle kayaks are covered from bow to stern by a limited 3-year warranty against manufacturing defects.

They can afford to offer an all-inclusive warranty because of their vast experience in designing and selling inflatable boats. They’ve stood behind their products for over 50 years.

As a proven leader in the boating industry, Sea Eagle generates confidence and peace of mind in those who own their boats. Their comprehensive warranty and outstanding commitment to customer service are second to none.

Want extra coverage on your kayak?

Sea Eagle Boats also offers a 3-Year Extended Hull Warranty in addition to the Limited 3-Year Warranty to give you 6-years of total warranty against any manufacturing defects.

The Extended Warranty applies to the hull only and is only offered at the time of purchase.

“If you’re not totally happy with your boat, just return it in good condition for a full refund of your purchase price.”

The following video from Sea Eagle demonstrates the ease of setup and inflation of a Sea Eagle FastTrack inflatable kayak.

The Sea Eagle 465ft FastTrack inflatable kayak is my top choice for a family kayak!

If you are looking for a true family kayak, this is it! There aren’t many 3-person kayaks out there and there’s still room for a little kid to ride along too. Or the family dog.

The Sea Eagle 465ft FastTrack inflatable kayak is an impressive 1, 2, or 3-person kayak with the rigidity, handling, and speed to rival any hardshell kayak in its class. All with the added benefits of being an inflatable!

No more bulky, heavy, plastic kayaks that are difficult to store and transport! These FastTrack kayaks with their superior technology are lighter and easier to handle!