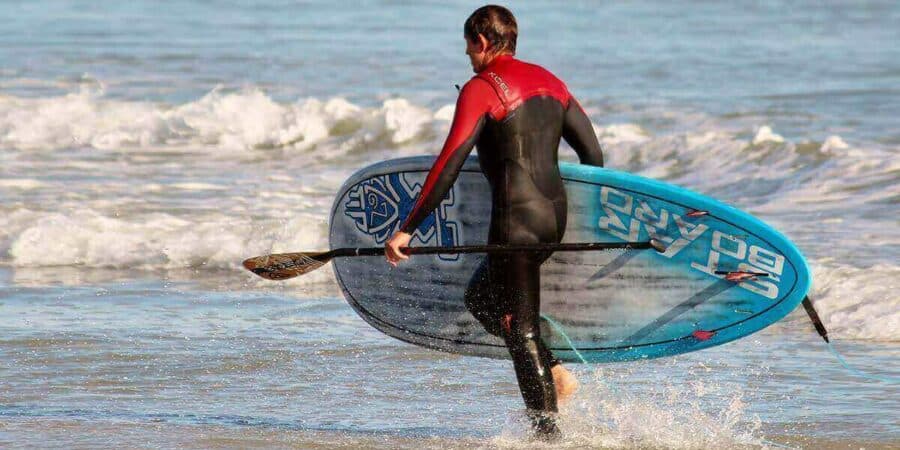 If you take part in water sports or you’re interested in being more involved in water sports like kayaking, you’ve probably worn neoprene clothing or seen it used. My first experience was in a dive class over 30 years ago. Neoprene has been around since 1930 but that doesn’t mean it’s entirely safe.

Let’s take a closer look at neoprene and answer the following questions and more:

Neoprene, also known as polychloroprene, is a synthetic rubber produced by the polymerization of chloroprene. Originally developed in 1930 by DuPont, neoprene was highly significant to wartime efforts due to the depletion of natural rubber.

Neoprene is actually a proprietary trade name of DuPont that has become generalized in its use. The more appropriate name, polychloroprene, isn’t used as often.

Neoprene has some advantages over natural rubber…

Until the end of WWII’s war efforts, neoprene was exclusively manufactured for military use. Once it came to the general market, uses for the public were developed such as wetsuits and other neoprene clothing and accessories for water sports.

Yes… Neoprene is produced in one of two forms, closed-cell or open-cell. The closed-cell form is waterproof. Closed-cell neoprene is made by foaming polychloroprene with tiny bubbles during manufacturing. These bubbles make neoprene foam more buoyant and improve its insulating capability.

What Gas Is Used to Create Bubbles in Neoprene?

Four reasons why nitrogen gas is most often used to create bubbles in the manufacturing of neoprene foam:

Is Neoprene Safe to Wear?

Neoprene is used to develop fabrics for the production of water sports clothing like wetsuits, waders for fishing, other accessories like knee braces, insulated water bottle sleeves, boat seat covers, and so much more.

Neoprene is not considered toxic, however, it is produced by the polymerization of chloroprene. Occupational exposure to chloroprene is hazardous.

According to Proposition 65 of the California government, levels of chloroprene in most neoprene products are very low and unlikely to cause exposure.

Hazards of short-term and long-term exposure to chloroprene according to the US Environmental Protection Agency (EPA):

Even though neoprene is produced by the polymerization of chloroprene which is carcinogenic, neoprene has not been classified as a carcinogen by the EPA and the use of neoprene products is not likely to cause exposure to chloroprene due to the extremely low levels found in most neoprene.

Do Neoprene Products Have a Prop 65 Warning?

The Prop 65 Warning is intended to improve the awareness of California residents to their overall chemical exposure from all products in their use. The warning is not intended to identify a particular product as being harmful or unsafe.

According to an article in the American Journal of Occupational Therapy entitled Neoprene Splinting: Dermatological Issues, neoprene poses two dermatological risks, allergic contact dermatitis (ACD) and miliaria rubra. These reactions are attributed to accelerants used in the manufacturing process.

How do You Know if You Are Allergic to Neoprene?

If you suspect that you are having an allergic reaction to neoprene, look for the following symptoms after contact and discontinue use. Once you develop a neoprene allergy, continued use can increase sensitivities.

Hypersensitivity to neoprene is rare though its incidence may increase as neoprene use in products increases.

How Long Do Neoprene Allergies Last?

Not all skin reactions to neoprene are allergic responses. Wetsuit rash and chafing are quite common. These are irritations caused by the wetsuit rubbing against your skin and although wetsuits are vital in cold water sports the cold weather can dry your skin increasing the likelihood of irritation.

Anti-chafing balm like Body Glide or wearing a baselayer or rash guard is often effective in protecting your skin.

For more check out the article on the prevention and treatment of wetsuit rash and chafing.

Reduced Efficiency of Neoprene Over Time

Neoprene products break down and lose efficiency in serving their function whether it be a knee brace or the insulating properties of a wetsuit. Over time, UV rays cause degradation, neoprene stretches, seams weaken, and bubbles in the foam become compressed.

Deterioration of neoprene can be a safety issue when the neoprene product can no longer serve the user as intended like keeping a kayaker warm in cold water.

For more on the longevity of wetsuits see, Will A Wetsuit Lose Its Ability To Insulate Over Time?

Is Neoprene Safe for the Environment?

No, neoprene is non-biodegradable, toxic when burned, and not environmentally safe to produce.

There is petroleum-based neoprene and limestone neoprene. Both methods of production create polychloroprene chips through the polymerization of chloroprene which is used to produce neoprene fabrics. Chloroprene as discussed earlier is hazardous.

Additionally, petroleum and limestone are both finite resources. Oil-based products take a heavy impact on the environment and limestone is removed from the earth with the use of fossil fuels.

Limestone initially sounds better but in the end, one isn’t really any more friendly on the environment than the other.

Please recycle neoprene products. These non-biodegradable products can have a future life outside a landfill.

What can be used instead of neoprene?

There are coldwater clothes outside those made of neoprene.

I’m personally impressed with Patagonia for removing neoprene from its product line and replacing it with Yulex-based products. Their commitment to the environment and transparency is refreshing.

If you are looking for a neoprene-free wetsuit, look no further than Patagonia’s Yulex Wetsuits and other neoprene-free products.

Benefits of Yulex vs. Neoprene

The benefits of Yulex versus neoprene according to Yulex and Patagonia Works:

Is neoprene waterproof, yes. It is also generally safe to wear but it is not safe for the environment.

Once you know how neoprene is made and its negative effect on the environment, it’s hard not to look for alternative clothing for staying warm in cold water and in cold weather.