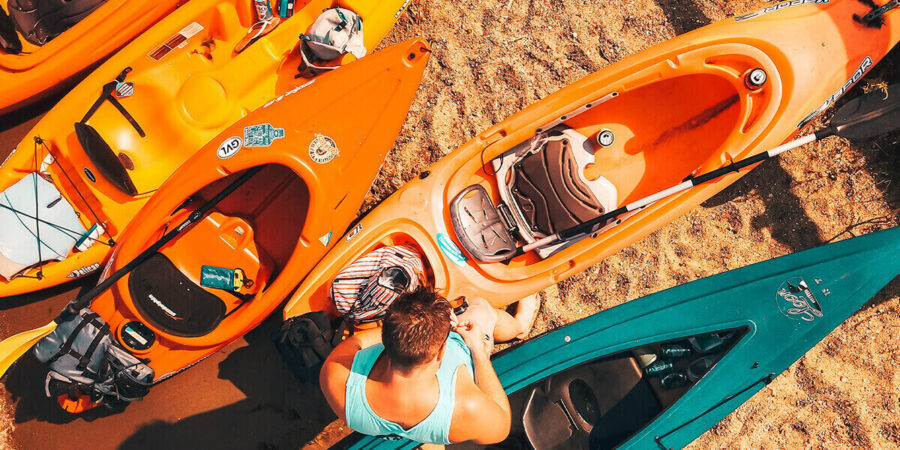 You have probably seen other kayakers drinking beer or other alcoholic beverages while enjoying a leisurely paddle or fishing from their kayak. The prevalence of alcohol use by paddlers has fueled confusion over the legality of drinking and paddling.

Can you get a DUI in a kayak?

North Dakota and Wyoming differ from the other 48 states. They allow a Blood Alcohol Limit (BAL) of 0.10%.

Boating under the influence includes more than just alcohol. Being under the influence of any substance or combination of substances (alcohol, over-the-counter medication, prescribed medication, marijuana, legal drug, or illicit drug) while operating a kayak can land you in serious trouble. Penalties for a BUI charge may include a hefty fine, jail time, and potential loss of your driver’s license.

If you are outside the United States of America, your country has its own version of a BUI. If you plan on kayaking under the influence, you should know the legal restrictions for that area.

This information contained in this article is not to be considered legal advice. I am not an attorney and I do not offer legal counsel. If you have gotten a DUI on a kayak or other vessel, find an attorney.

Are All Kayaks Considered a Vessel Under BUI Laws?

There are different types of kayaks… inflatable, hard shell, paddle, pedal, and motorized.

For the United States, the Coast Guard’s determination of what is or is not a vessel often sets precedence for a state’s ruling but this isn’t always the case.

For the U.S. Coast Guard, the definition of the word vessel found in 1 USC 3 is:

“The word “vessel” includes every description of watercraft or other artificial contrivance used, or capable of being used, as a means of transportation on water.”

The U.S. Coast Guard considers kayaks, canoes, paddleboards, and even inner tubes to be vessels. For the U.S. Coast Guard, a kayak falls under BUI laws. But states like Ohio exclude flotation devices with one air chamber. Most river tubes and many fishing float tubes, rafts, and inflatable kayaks have only one tube.

Potential charges, however, are not limited to a DUI. Someone drunk on public waters could be arrested or receive a citation for different offenses even if their vessel is not covered by DUI law. Let’s take a look…

Related Article: 12 Types Of Inflatable Boats According To The U.S. Coast Guard

Charges Other Than Boating Under the Influence

Did you know that many public waters are part of a national, state, or local park system which prohibits alcohol use? A law enforcement officer can make an arrest if a person is guilty of drinking alcohol in a park.

If you are kayaking on public waters that allow the use of alcohol, you are not exempt from public intoxication charges. While drinking may be legal, public intoxication is not. Law enforcement officers can arrest or issue a drunk and disorderly charge or drug possession charge even when BUI laws are not applicable to your area.

Littering is also a problem with kayakers who drink. While littering is illegal in all states, the penalties vary. To learn more about litter laws in your area, check out the State Littering Penalties at the National Conference of State Legislatures. Always bring along something to keep your trash in while kayaking.

What’s the Fine for a DUI on a Kayak?

Boating and drinking laws vary by state and so do the fines for a BUI. Penalties for a BUI may include hefty monetary fines, jail time, loss or suspension of operating privileges, possible suspension of your driver’s license, possible felony conviction, required completion of an alcohol education program, and more.

To avoid paddling on the wrong side of the law, visit the website of any governing body that has jurisdiction over the water on which you plan to kayak. Learn the laws for the area and call the state or park service for clarity if you are unclear.

Boat-Ed has thoroughly covered the legal blood alcohol limit and penalties for each state. I’d like to defer to their list here instead of reproducing it. You’ll be hard-pressed to find a better resource outside the law enforcement agencies that govern the body of water you intend to kayak.

How to Avoid a DUI on a Kayak

(*Please Note: A standard drink according to the NIAAA (National Institute on Alcohol Abuse and Alcoholism) is typically 14 grams of pure alcohol; 12 ounces of regular beer, 5 ounces of wine, and 1.5 ounces of distilled spirits.)

What If You Are Stopped for a BUI on a Kayak?

I’ve seen officers with binoculars hiding on the side of the Harpeth River in TN. They wade out into the river to pull over kayakers and canoers who are suspected of an infraction.

Be honest, kind, respectful, and considerate. These officers are there to do their job. Being courteous may get leniency in some situations.

At the end of the day, if you choose to kayak under the influence, you have to live with the consequences of your actions.

Dangers of Boating Under the Influence

The dangers of BUI include impaired vision, coordination, balance, and judgment. A kayaker’s impairment can be exaggerated by wind, waves, spray, the boat’s motion, the sun’s reflections, paddling fatigue, hypothermia due to an increased sensation of warmth, and dehydration from alcohol, sun, heat, and exertion.

Boaters under the influence of alcohol or drugs increase the risk of accidents, injuries, fatalities, damage to personal property, loss of gear, and annoying others in their vicinity.

According to the U.S. Coast Guard, alcohol use is involved in about a third of all recreational boating fatalities, and a boater with a blood alcohol concentration (BAC) above 0.10% is 10 times more likely to die in a boating accident than that of a boater who has not consumed alcohol. Boat passengers are also at a greater risk of injury or death, especially if they are also drinking. (See the U.S. Coast Guard BUI Initiatives for more information.)

TIP: If you are going to kayak under the influence, don’t just have a lifejacket on board, each person should wear a PFD to reduce their risk of drowning.

Alcohol use also substantially increases the likelihood of physical assaults and sexual assaults.

The daughter of a local sheriff once told me that their family would not canoe on the Buffalo River in TN without a firearm due to the growing number of alcohol-related sexual assaults on the river. Back then the river was known for the Mardi Gras-like behavior of drinking, flashing breasts, and throwing beads. That same year a group of friends and I rented canoes from an outfitter on the Buffalo River and received a warning about sexual assaults. Thankfully, law enforcement stepped in to control the problem.

Will a BUI on a Kayak Affect Your Driver’s License?

A boater convicted of a BUI may permanently lose their driver’s license or have it suspended in the following states:

Can Passengers Drink Alcohol on a Kayak?

It depends on the state, the park system, and the waterway just as it does for the boat’s operator. The passenger would also be subject to public intoxication charges, drunk and disorderly charge, or drug possession charge if applicable.

How Does Alcohol Use Affect Boat Passengers?

Boat passengers are also at a greater risk of injury or death, especially if they are also drinking.

Can You Get a BUI While High on Marijuana?

Yes. You can get both a boating under the influence charge and a drug possession charge.

Can You Get a BUI on a Private Lake or Pond?

If your state bans boating under the influence at the state level, you could potentially get a BUI on a private lake or pond.

Who Can Cite You for Boating Under the Influence?

A park ranger, Fish and Wildlife officer, police officer, or Coast Guard officer is most likely to cite you for BUI.

Yes, it is possible for you to get a BUI or BWI while kayaking. Intoxicated boating is frowned upon by law enforcement the world over.

Legal aspects aside boating under the influence can cause property damage, injury, and death.